Apostera: A New Era of Autonomy

Andrey Golubinskiy, CEO
The commute between two destinations through the fastest route remains ineffective many a time, despite the innovative advancements in the mapping and navigation space. Narrating one such instance, Andrey Golubinskiy, CEO of Apostera, says, “I took a taxi in Munich the other day, and the taxi driver missed the right exit twice on the fastest route, which added 23 minutes to my commute. Such instances affect people daily while navigating through traffic.” Golubinskiy’s concern isn’t anything new for commuters; in fact, it has been a long-standing obstacle for people on the road. At Apostera, Golubinskiy and team aspire to overcome this formidable hurdle with the introduction of mixed reality-based navigation system. Not just that, Apostera also strives to make autonomous driving safer and efficient. It develops a sense of trust between autonomous driving systems and passengers by consistently visualizing what the vehicle sees and thinks.

Apostera aims to overhaul the traditional forms of navigation that involve a display mounted on the dashboard of a car by infusing mixed reality into mapping solutions. Natively, drivers are required to shift their gaze from the path in front of them to the screen inside the car on the dashboard, often distracting them during the commute. This increases a driver’s response time to actions unfolding on the road while navigating their vehicle through traffic, which is the primary cause of missed turns and exits. And, if the driver is not familiar with the fastest route for a destination, he or she is likely to slow down the vehicle in an attempt to identify the correct road, in turn, leading to the possibility of skipping turns or longer commuting time. Amidst all this, the driver will not be able to judge the movement of the traffic, increasing the chances of congestions. Moreover, shuttling between the dashboard screen and the road ahead could potentially increase the likelihood of accidents.

Apostera, on the other hand, revolutionises the concept of navigation by projecting mapping information at a virtual distance in front of the driver using head-up displays (HUDs), helping drivers enjoy the combination of physical and virtual worlds merged together for a disturbance-free commute. This way, the driver is never distracted, with his or her eyes always on the road and relevant information displayed on the windshield that blends in with the real world through HUDs. As futuristic as it sounds, Apostera has already tested this concept with two demo cars, testifying their merits in the projection of navigation information virtually onto real world scenarios. “A lot of mapping solution providers try and replicate the real world to create a digital copy that functions as a map.

They add terrain, buildings, and other environmental elements on the map, allowing drivers to localise themselves in the digital environment easily. But, the digital copy of the map and what a driver sees in front of the car sometimes are completely different, and such a set up doesn’t help at complex junctions. Therefore, we aim to solve this navigation problem differently,” explains Golubinskiy. “We do not try to replicate the real world. With our mixed reality system, we augment the real world with a virtual one, where all the necessary information is available at a virtual distance in the front.”

With mapping technologies powered by mixed reality sensors, Apostera combines a multitude of functionalities such as collision detection, obstacle avoidance, and driver assistance with real use cases or scenarios for optimal navigation. By sensing various elements on the road such as pedestrians, vehicles, lane boundaries, or any obstacles that come up during driving, Apostera’s mixed reality navigation system assists the driver through the course of the journey. The result of this assisted navigation is remarkable, as it allows drivers to obtain a clear view of what is going on in front of them and also around the corner, which is a potential blind spot. Additionally, the company has developed Vehicle to Infrastructure and Vehicle to Vehicle SW modules integrated with navigation system, paving the way for better interaction with the surroundings during such commutes. The firm’s mixed reality solution also helps drivers during low visibility by visualising the road ahead while highlighting the boundaries on the pavement virtually. A navigation system such as this could prove to be a game-changer in the world where 300,000 accidents happen in the UK, "25-30 percent of which caused by GPS linked devices". Apostera is already in collaboration with premium OEMs to bring this system to market in the near future. The mixed reality navigation system displays alerts such as, “Your car is going to change lane and slow down prior to exit from the motorway.” All in all, such modules deliver a technological upper hand to Apostera, as the company aspires to improve upon navigation and mapping functionalities.

"With our mixed reality solutions, a driver will never miss an exit"

Apostera’s technological prowess in navigation is built on three pillars: improving driving efficiency, enhancing autonomous driving capabilities, and visualising the information needed around the corner. Golubinskiy says that these pillars are forged to develop a sense of trust with autonomous driving while also visualising the objects recognised by a vehicle as it traverses toward the destination. “As solutions provider, our job is to ensure that passengers trust autonomous driving, while offering a safe, efficient, and reliable avenue for navigation,” he adds. “Mixed reality will help in increasing the acceptance of advanced driver assistance systems (ADAS), as the traditional driver assistance systems do not provide a constant visual feedback to the commuters.”
The company plans to improve upon the decision-making capabilities of its autonomous driving system, projecting how a car would see the pavement to make decisions based on events occurring during the course of commute.

By making the manual to autonomous system transition more seamless, Apostera envisions fulfilling its goal of delivering a trustworthy navigation guidance system for commuters. The combination of mixed reality systems and autonomous driving capabilities enables Apostera to open up the navigation space to a multitude of eventful avenues, with the provision to improve navigation functionalities, understand the interaction between vehicles and unprecedented driving scenarios, and offer eCommerce recommendations to passengers based on location-specific information. This allows OEMs to tap into additional revenue streams while interacting with the external environment, wherein location-based shop/food-joint recommendations and promotional offers can be showcased to passengers in accordance with the preferences. This feature allows commuters to benefit from parking offers while also displaying open parking spaces. Together, all of these functionalities provide users with the best of both physical and digital worlds through navigation powered by mixed reality.

A Proof of Concept

Upon noticing Apostera’s competency in the navigation space, a large OEM has selected the company to create an integrated, in-car AR solution. Apostera is tasked with building a production AR-HUD solution while ensuring that the core production components can be reused for further developmental projects and clients. With the project nearing its maturity, Apostera expects to witness a CAGR growth of 61.8 percent by the year 2023, grossing a revenue worth of €30,000,000 in the passenger car segment.

This trailblazing success comes as a result of Apostera’s technological acumen. Built from the ground up by a team of automotive, navigation, machine learning, computer vision, and sensor fusion experts, Apostera supplements the current navigation technologies through mixed reality. In contrast with the traditional navigation solution providers such as Google or Waze that natively build the digital ecosystem needed for navigation, Apostera augments the already existing mapping technology with mixed reality, making their systems much more valuable than the rest in the marketplace. The merit of combining this mixed reality system with the autonomous driving capabilities nurtures a sense of trust among drivers as they take to the road. It allows them to comprehend the decisions made by the vehicle in autonomy by visualising the pavement in front of them with digitised navigation information projected on to the windshield. Such an undisputed combination of the navigation technology is not only unheard of but also a milestone in the development of mapping solutions. “With our mixed reality solutions, a driver will never miss an exit,” emphasises Golubinskiy. Going by his words, it is safe to say a reliable and safe navigation solution for travellers is right around the corner, exemplifying the efforts of over 85 employees working worldwide for the development of Apostera’s mixed reality solutions.

Description
Apostera is an automotive software company offering a set of innovative solutions to its clients. Headquartered in Germany, the company addresses demand in Europe, North America, and Asia. Possessing outstanding advanced engineering talent, Apostera creates an ADAS software platform as the basement for the set of solutions to assist the driver and reshape driving experience going from point A to point B. The software solutions that merge the real world with a virtual one, like mixed reality navi guidance, advanced camera-based perception, and fusion solution, augmented surrounding view monitoring system, vehicle-to-vehicle and to-infrastructure components are bringing mobility world to the new era of autonomy 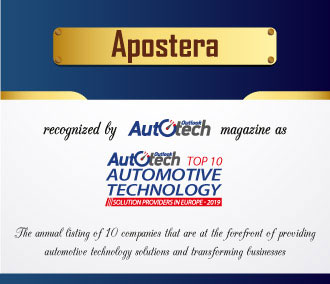 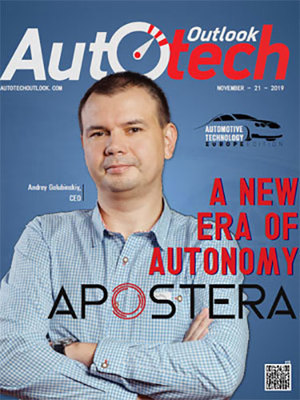 "Apostera’s technological prowess in the navigating space is built on three pillars: improving driving efficiency, enhancing autonomous driving capabilities, and visualising the information around the corner"